Zawiya, officially Zawia (Arabic: محافظة الزاوية‎ Az Zāwiya), is one of the districts of Libya. It is located in the north western part of the country, in what had been the historical region of Tripolitania. Its capital is also named Zawia. Since the 2007 reorganization of Libyan districts, the former district of Sabratha Wa Surman has been part of Zawiya District. In the north, Zawiya has a shoreline bordering the Mediterranean Sea, while it borders Tripoli in east, Jafara in southeast, Jabal al Gharbi in south, Nuqat al Khams in the west.
Per the census of 2012, the total population in the region was 157,747. The average size of the household in the country was 6.9. There were totally 22,713 households in the district, with 20,907 Libyan ones. The population density of the district was 1.86 persons per sq. km. 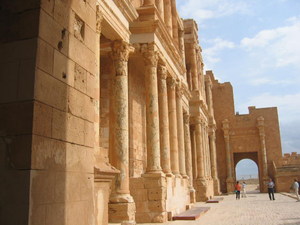