Zagazig (Arabic: الزقازيق‎ az-Zaqāzīq Egyptian Arabic pronunciation: [ez.zæʔæˈziːʔ], rural: [ez.zæɡæˈziːɡ]) is a city in Lower Egypt. Situated in the eastern part of the Nile delta, it is the capital of the governorate of Sharqia.
It is located on the Muweis Canal and is a hub of the corn and cotton trade. There is a museum of antiquities, the Sharkeya National Museum (sometimes called the Amed Orabi Museum, at Herriat Raznah) that contains many important archaeological exhibits (currently closed for restoration).Zagazig University, one of the largest universities in Egypt, is also located in the city, with colleges in different fields of science and arts. The Archaeological Museum of the University of Zagazig exhibits significant finds from the nearby sites, Bubastis (Tell Basta) and Kufur Nigm. Also there is a branch for Al-Azhar University, the largest Islamic university in the world.
Zagazig is the birthplace of famous Coptic Egyptian journalist, philosopher and social critic, Salama Moussa.
The most notable streets in Zagazig are Farouk Street, Government Street, and El Kawmia Street. 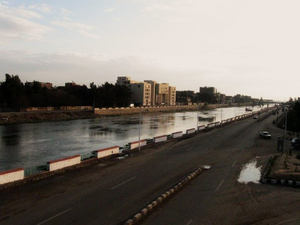