Turkistan Region (Kazakh: Түркістан облысы, romanized: Túrkistan oblysy; Russian: Туркестанская область), previously South Kazakhstan Region (Kazakh: Оңтүстік Қазақстан облысы, romanized: Ońtústik Qazaqstan oblysy; Russian: Южно-Казахстанская область, romanized: Yuzhno-Kazakhstanskaya oblast), is the southernmost region of Kazakhstan. Population: 2,469,367 (2009 Census results); 1,978,339 (1999 Census results). Its capital is Turkistan. Other cities in Turkistan Region include Sayram, Kentau, Arys, Shardara, Zhetisay, Saryagash, and Lenger. This region and Atyrau Region are Kazakhstan's two smallest regions; both are about 117,300 square kilometers in area. Turkistan Region borders the neighboring country of Uzbekistan (and is very near the Uzbekistan capital Tashkent), as well as three other Kazakhstan regions: Karaganda Region (to the north), Kyzylorda Region (to the west), and Jambyl Region (to the east). The Syr Darya passes through the region, on its way to the Aral Sea. Also, an oil pipeline runs from Turkmenabat, Turkmenistan to Omsk, Russia (where it connects with a larger, Siberian pipeline) through South Kazakhstan. Oil, lead and zinc are refined in Shymkent.
The Region was originally formed in the Kazakh SSR within the Soviet Union by the name South Kazakhstan Oblast. In 1962, it was renamed Chimkent Oblast, but this only lasted until 1992, when it was changed back to the old name. In 2018, it was changed to Turkistan Oblast, which is the current name.
The administrative center of the region was Shymkent until 19 June 2018, when it was taken out of the region and subordinated directly to the central government. The administrative center was moved to Turkistan, and the region renamed Turkistan Region. 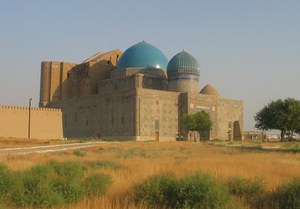