Tsuwano (津和野町, Tsuwano-chō) is a town located in Kanoashi District, Shimane Prefecture, Japan.
As of March 2017, the town has an estimated population of 7,478 and a density of 25.0 persons per km². The total area is 307.09 km².
Tsuwano is remotely located and surrounded by hills. Though geographically closer to Yamaguchi, the capital of Yamaguchi Prefecture, it is in Shimane Prefecture. A train trip to Matsue, Shimane’s capital, takes as long as four hours. As it is close to Yamaguchi Prefecture, many tourists who come to Tsuwano also visit Hagi on the Sea of Japan and Yamaguchi at the same time, and Tsuwano is often mistaken as being in Yamaguchi prefecture.
Popularly called the "Little Kyoto of San-In," Tsuwano is known for its picturesque main street, "Tono-machi," which is lined with Edo-era buildings and Koi ponds. It also boasts one of the oldest still-used "Yabusame" (horse back archery) ranges in all of Japan, and its annual Yabusame festival on the second Sunday of April is a large tourist draw for the San-In region.
On September 25, 2005 the town of Nichihara was merged into Tsuwano.

Unusually, Tsuwano is somewhat home to two Catholic churches. The Catholic church in Tsuwano itself is dedicated to Saint Francis Xavier, who visited Japan as a missionary in 1549–50, and is located on its main street. The Santa Maria Church at Otome Pass was dedicated in 1951 and is part of a memorial for Japanese Christians persecuted and tortured in Tsuwano by the government during the Edo and Meiji periods.
Other notable locations and tourist attractions within Tsuwano include the ruins of Tsuwano Castle, where the Kamei clan ruled the Tsuwano fiefdom from the 17th through mid 19th-centuries, and the mountainside Taikodani Inari shrine with its "1000 vermilion torii." In 1773 Tsuwano's seventh-generation feudal lord Kamei Norisada had Taikodani Inari built to enshrine a share of the spirit worshipped at the Fushimi Inari in Kyoto. This shrine was built to pray for the safety of Kamei's castle and peace among his people. As one of five Inari shrines in Japan, it attracts people from throughout western Japan to pray for prosperity and good fortune in the coming year. 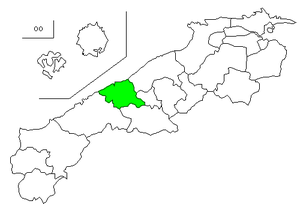 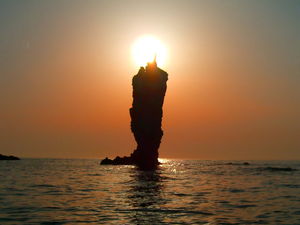 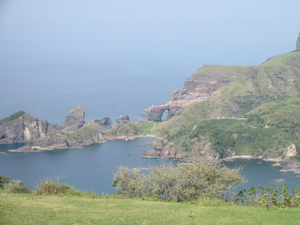 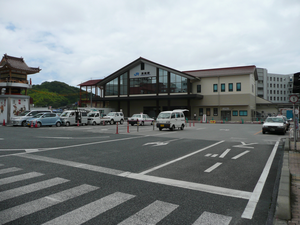