Tsushima (対馬市, Tsushima-shi) is an island city grouped in Nagasaki Prefecture, Japan. It is the only city of Tsushima Subprefecture and it encompasses all of Tsushima Island Archipelago, which lies in the Tsushima Strait north of Nagasaki on the western side of Kyushu, the southernmost mainland island of Japan.
As of March 2017, the city has an estimated population of 31,550 and a population density of 45 persons per km2. Its total area is 708.61 km2, 17.3% of the area of Nagasaki Prefecture. 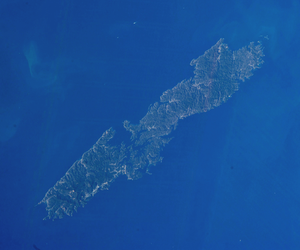