Tema is a city on the Bight of Benin and Atlantic coast of Ghana. It is located 25 kilometres (16 mi) east of the capital city; Accra, in the region of Greater Accra, and is the capital of the Tema Metropolitan District. As of 2013, Tema is the eleventh most populous settlement in Ghana, with a population of approximately 161,612 people – a marked decrease from its 2005 figure of 209,000. The Greenwich Meridian (00 Longitude) passes directly through the city. Tema is locally nicknamed the "Harbour City" because of its status as Ghana's largest seaport. It consists of 25 different communities which are numbered accordingly with each of them having easy access to the basic amenities.Tema is a city constructed on the site of a small fishing village. Tema was commissioned by Ghana's first president, Kwame Nkrumah, and grew rapidly after the construction of a large harbour in 1961. The Tema metropolis was designed, planned and developed by the award-winning urban planner and Ghana's first architect, Theodore S. Clerk. It is now a major trading centre, home to an oil refinery and numerous factories, and is linked to Accra by a highway and railway. Tema is one of Ghana's two deep seaports, the other being Sekondi-Takoradi. Tema became an Autonomous Council in 1974 and was elevated to the status of a Metropolitan Assembly in December 1990. Tema metropolitan forms part of the sixteen (16) Metropolis, Municipalities and Districts in the Greater Accra Region. The Metropolitan shares boundaries with Ashaiman Municipal, Adenta Municipal District, and Ledzokuku-Krowor Municipal District to the west respectively, to the east with Kpone Katamanso District, to the North with Dangme West District and to the South with the Gulf of Guinea. 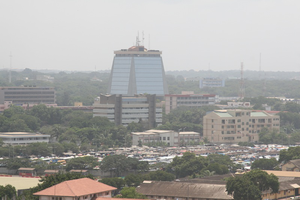