The Tarapacá Region (Spanish: Región de Tarapacá, pronounced [taɾapaˈka]) is one of Chile's 16 first-order administrative divisions. It comprises two provinces, Iquique and Tamarugal. It borders the Chilean Arica and Parinacota Region to the north, Bolivia's Oruro Department and Potosí Department on the east, Chile's Antofagasta Region on the south and the Pacific Ocean on the west. The port city of Iquique is the region's capital.
Much of the region was once the Tarapacá Province of Peru, which was annexed by Chile under the 1883 Treaty of Ancón at the close of the War of the Pacific. The region was important economically as a site of intense saltpeter mining, before synthetic nitrate manufacturing became possible. A number of abandoned mining towns can still be found in the region.
The present day Tarapacá Region was created in 2007 by subdividing the former Tarapacá Region under Law No. 20,175, which was signed by President Michelle Bachelet in Arica. 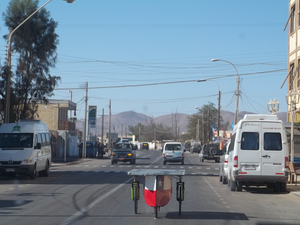