St. John's is the capital and largest city of the Canadian province of Newfoundland and Labrador. It is on the eastern tip of the Avalon Peninsula on the large Canadian island Newfoundland. The city spans 446.04 square kilometres (172.22 sq mi) and is the easternmost city in North America (excluding Greenland).Its name has been attributed to the Nativity of John the Baptist, when John Cabot was believed to have sailed into the harbour in 1497 and to a Basque fishing town with the same name. Existing on maps as early as 1519, it is one of the oldest cities in North America. It was officially incorporated as a city in 1888. With a metropolitan population of approximately 219,207 (as of 1 July 2017), the St. John's Metropolitan Area is Canada's 20th-largest metropolitan area and the second-largest Census Metropolitan Area (CMA) in Atlantic Canada, after Halifax.The city has a rich history, having played a role in the French and Indian War, the American Revolutionary War, and the War of 1812. Italian inventor Guglielmo Marconi received the first transatlantic wireless signal in St. John's. Its history and culture have made it into an important tourist destination. 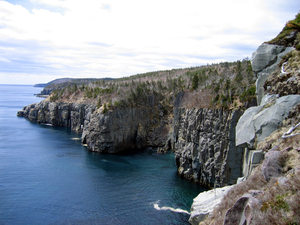