The Space Needle is an observation tower in Seattle, Washington, United States. Considered to be an icon of the city and the Pacific Northwest, it has been designated a Seattle landmark. Located in the Lower Queen Anne neighborhood, it was built in the Seattle Center for the 1962 World's Fair, which drew over 2.3 million visitors. Nearly 20,000 people a day used its elevators during the event.The Space Needle was once the tallest structure west of the Mississippi River, standing at 605 ft (184 m). The tower is 138 ft (42 m) wide, weighs 9,550 short tons (8,660 metric tons), and is built to withstand winds of up to 200 mph (320 km/h) and earthquakes of up to 9.0 magnitude, as strong as the 1700 Cascadia earthquake. It also has 25 lightning rods.The Space Needle features an observation deck 520 ft (160 m) above ground, providing views of the downtown Seattle skyline, the Olympic and Cascade Mountains, Mount Rainier, Mount Baker, Elliott Bay, and various islands in Puget Sound. Visitors can reach the top of the Space Needle by elevators that travel at 10 mph (16 km/h), completing the ascent in 41 seconds (they are slowed to 5 mph (8.0 km/h) on windy days). On April 19, 1999, the city's Landmarks Preservation Board designated the tower a historic landmark. 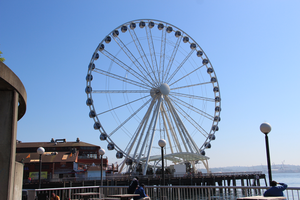 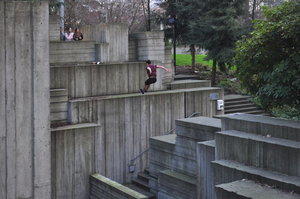 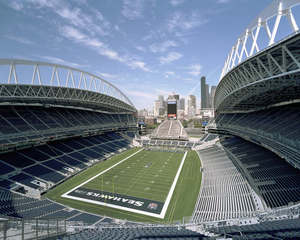 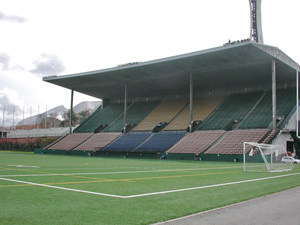