Southeast Asia or Southeastern Asia is the southeastern subregion of Asia, consisting of the regions that are geographically south of China, east of the Indian subcontinent and north-west of Australia. Southeast Asia is bordered to the north by East Asia, to the west by South Asia and the Bay of Bengal, to the east by Oceania and the Pacific Ocean, and to the south by Australia and the Indian Ocean. The region is the only part of Asia that lies partly within the Southern Hemisphere, although the majority of it is in the Northern Hemisphere. In contemporary definition, Southeast Asia consists of two geographic regions:

Mainland Southeast Asia, also known as the Indochinese Peninsula and historically as Indochina, comprising Cambodia, Laos, Myanmar, Peninsular Malaysia, Thailand, and Vietnam.
Maritime Southeast Asia, also known as the Malay Archipelago and historically as Nusantara, comprising the Andaman and Nicobar Islands (India), Christmas Island and Cocos (Keeling) Islands (Australia), Brunei, East Malaysia, East Timor, Indonesia (except Western New Guinea, which is considered a part of Oceania), the Philippines, and Singapore.The region lies near the intersection of geological plates, with both heavy seismic and volcanic activities. The Sunda Plate is the main plate of the region, featuring almost all Southeast Asian countries except Myanmar, northern Thailand, northern Laos, northern Vietnam, and northern Luzon of the Philippines. The mountain ranges in Myanmar, Thailand, and peninsular Malaysia are part of the Alpide belt, while the islands of the Philippines are part of the Pacific Ring of Fire. Both seismic belts meet in Indonesia, causing the region to have relatively high occurrences of earthquakes and volcanic eruptions.Southeast Asia covers about 4.5 million km2 (1.7 million mi2), which is 10.5% of Asia or 3% of earth's total land area. Its total population is more than 655 million, about 8.5% of the world's population. It is the third most populous geographical region in Asia after South Asia and East Asia. The region is culturally and ethnically diverse, with hundreds of languages spoken by different ethnic groups. Ten countries in the region are members of the Association of Southeast Asian Nations (ASEAN), a regional organization established for economic, political, military, educational and cultural integration amongst its members. 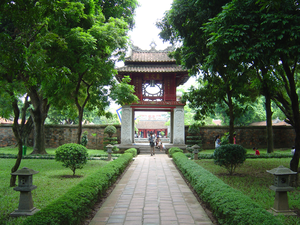 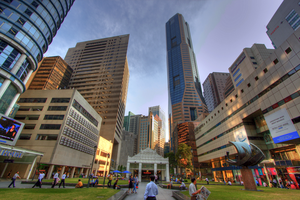 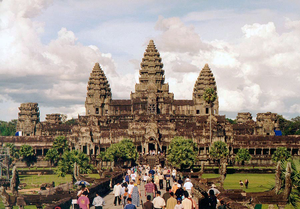 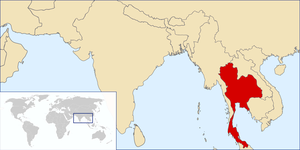