San Nicolás de los Garza, sometimes known only as San Nicolás, is a city and coextensive municipality in the Mexican state of Nuevo León that is part of the Monterrey Metropolitan area. It has become primarily a city for residencies and family houses, although it still has several factories that tend to relocate to the periphery of the metropolitan area. It is the third-largest city in the state, behind Monterrey and Guadalupe.
It houses the Universidad Autónoma de Nuevo León (Autonomous University of Nuevo León), one of the most prestigious public schools in Mexico and Latin America.
San Nicolás, although less populated than Monterrey, has the higher population density. 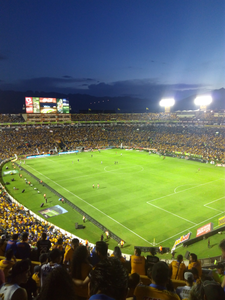