San Luis Obispo () SLO ( for short) is a city in the U.S. state of California, located in San Luis Obispo County, approximately 190 miles (310 km) north of Los Angeles and 230 miles (370 km) south of San Francisco. Located in Southern California's Central Coast region, the population of the city was 45,119 at the 2010 census. The population of the county was 269,637 in 2010.
Founded in 1772 by Spanish Franciscan Junípero Serra, San Luis Obispo is one of California's oldest European-founded communities. Serra's original mission was named after the 13th-century saint and bishop Louis of Toulouse. The city, locally referred to as San Luis, SLO, or SLO Town (as its county is also referred to as SLO) is the county seat of San Luis Obispo County and is adjacent to California Polytechnic State University. 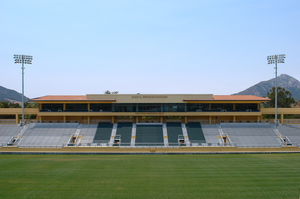