San Luis Potosí, commonly called SLP or simply San Luis, is the capital and the most populous city of the Mexican state of San Luis Potosí. The city lies at an elevation of 1,864 metres (6,115 feet). It has an estimated population of 824,229 in the city proper and a population of approximately 1,221,526 in its metropolitan area, formed with the neighbour city of Soledad de Graciano Sánchez and other surrounding municipalities, which makes the metropolitan area of Greater San Luis Potosí the eleventh largest in Mexico.
The city is in the west-central part of the state of San Luis Potosí, at 22.16°N, 100.98°W. The municipality has an area of 1,443.14 square kilometres (557.20 square miles). It is part of the macroregion of Bajío.The city is named after Louis IX of France (also known in Mexico as San Luis Rey de Francia, Saint Louis, King of France), who is the city's patron saint. Potosí was added in reference to the fabulously rich mines of Potosí, Bolivia, discovered some forty years before the city was founded, as the exploitation of silver and gold mines in Cerro de San Pedro, near San Luis, was the main reason for the founding of the city in 1592.Now, the city is one of the main industrial centres in central Mexico with a prolific manufacturing industry. A number of foreign industries have chosen to invest in San Luis Potosí in the last decades thanks to its strategic location for trade, as the city is located halfway between Mexico City and the United States border, as well as in the middle of the triangle formed by the three largest cities in Mexico: Mexico City, Guadalajara, and Monterrey.Besides its industry-based economy, recently the city has been promoted as a touristic destination in central Mexico by state and federal programs. San Luis Potosí's historic center displays a great mixture of different artistic styles in many buildings and is a major example of colonial architecture in Mexico. In 2010, the historic center was listed as a UNESCO World Heritage Site within Camino Real de Tierra Adentro. 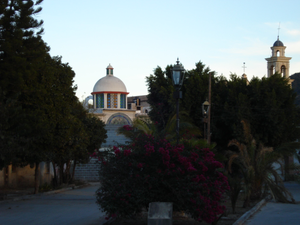