Saitama (さいたま市, Saitama-shi, Japanese: [saꜜitama]) is the capital and the most populous city of Saitama Prefecture, Japan. Its area incorporates the former cities of Urawa, Ōmiya, Yono and Iwatsuki. It is a city designated by government ordinance. Being in the Greater Tokyo Area and lying 15 to 30 kilometres north of central Tokyo, many of its residents commute into Tokyo. As of 1 January 2020, the city had an estimated population of 1,309,768, and a population density of 6,024 persons per km². Its total area is 217.43 square kilometres (83.95 sq mi). 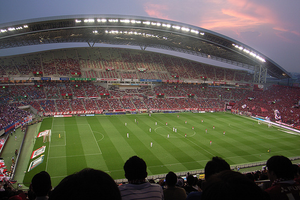