Roskilde ( ROSK-il-ə, Danish: [ˈʁʌskilə]), located 30 km (19 mi) west of Copenhagen on the Danish island of Zealand, is the main city in the eponymous municipality. With a population of 51,262 (as of 1 January 2020), the city is a business and educational centre for the region and the 10th largest city in Denmark. It is governed by the administrative council of Roskilde Municipality.
Roskilde has a long history, dating from the pre-Christian Viking Age. Its UNESCO-listed Gothic cathedral, now housing 39 tombs of the Danish monarchs, was completed in 1275, becoming a focus of religious influence until the Reformation.
With the development of the rail network in the 19th century, Roskilde became an important hub for traffic with Copenhagen, and by the end of the century, there were tobacco factories, iron foundries and machine shops. Among the largest private sector employers today are the IT firm BEC (Bankernes EDB Central) and seed company DLF. The Risø research facility is also becoming a major employer, extending interest in sustainable energy to the clean technology sphere. The local university, founded in 1972, the historic Cathedral School, and the Danish Meat Trade College, established in 1964, are educational institutions of note. Roskilde has a large local hospital which has been expanded and modernized since it was opened in 1855. It is now increasingly active in the research sphere. The Sankt Hans psychiatric hospital serves the Capital Region with specialized facilities for forensic psychiatry.
The cathedral and the Viking Ship Museum, which contains the well-preserved remains of five 11th-century ships, attract more than 100,000 visitors annually. In addition to its internationally recognized tourist attractions and its annual rock festival, Roskilde is popular with shoppers thanks to its two centrally located pedestrian streets complete with restaurants, cafés, and a variety of shops. The city is home to the FC Roskilde football club which play in the Danish 1st Division, the Roskilde Vikings RK rugby club, and the rowing club, Roskilde Roklub. In the 1970s, the city benefited from the opening of the university and from the completion of the Holbæk Motorway connecting it to Copenhagen. Roskilde has the oldest operational railway station in Denmark, with connections across Zealand as well as with Falster, Lolland, and Jutland. The local airport opened in 1973, mainly serving light aircraft for business use and flight instruction.
Among the city's notable citizens are Absalon, the bishop who founded Copenhagen in the 12th century, L. A. Ring, the symbolist painter who gained fame in the 1880s, the writer Lise Nørgaard who wrote the popular Danish TV series Matador in 1978 and the rower Thomas Ebert who became an Olympic gold medallist in 2004. 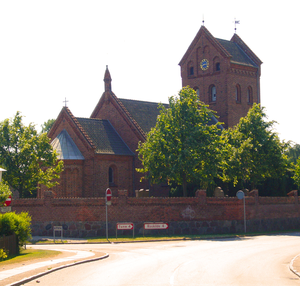 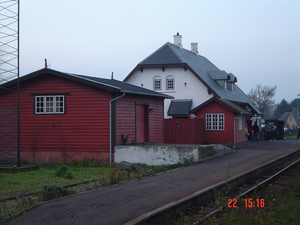 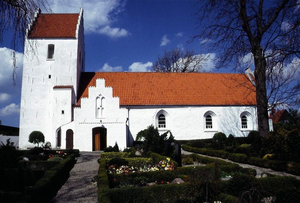