Reno ( REE-noh) is a city in the northwest section of the U.S. state of Nevada, along the Nevada-California border, about 22 miles (35 km) from Lake Tahoe, known as "The Biggest Little City in the World". Known for its casino and tourism industry, Reno is the county seat and largest city of Washoe County and sits in a high desert river valley at the foot of the Sierra Nevada. Its downtown area (along with the neighboring city Sparks) occupies a valley informally known as the Truckee Meadows, which because of large-scale investments from Greater Seattle and San Francisco Bay Area companies such as Amazon, Tesla, Panasonic, Microsoft, Apple, and Google has become a new major technology center in the United States. The city is named after Union Major General Jesse L. Reno, who was killed in action during the American Civil War at the Battle of South Mountain on Fox's Gap.
Reno is part of the Reno–Sparks metropolitan area, the second-most populous metropolitan area in Nevada after the Las Vegas Valley. Known as Greater Reno, it includes Washoe, Storey, and Lyon Counties, as well as the state capital, Carson City. 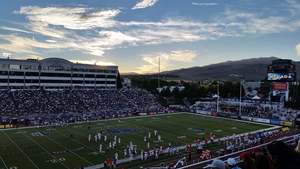