Recife (Brazilian Portuguese: [ʁeˈsifi] (listen)) is the fifth-largest urban area in Brazil with 4,054,866 inhabitants, the largest urban area of the North/Northeast Regions, and the capital and largest city of the state of Pernambuco in the northeast corner of South America. The population of the city proper was 1,625,583 in 2016. The first slave port in the Americas, Recife was founded in 1537, during the early Portuguese colonization of Brazil, as the main harbor of the Captaincy of Pernambuco, known for its large scale production of sugar cane. It was the former capital Mauritsstad of the 17th century colony of New Holland of Dutch Brazil, established by the Dutch West India Company. The city is located at the confluence of the Beberibe and Capibaribe rivers before they flow into the South Atlantic Ocean. It is a major port on the Atlantic. Its name is an allusion to the stone reefs that are present by the city's shores. The many rivers, small islands and over 50 bridges found in Recife city centre characterise its geography and led to the city being called the "Brazilian Venice". As of 2010, it is the capital city with the highest HDI in Northeast Brazil and second highest HDI in the entire North and Northeast Brazil (second only to Palmas).The Metropolitan Region of Recife is the main industrial zone of the State of Pernambuco; major products are those derived from cane (sugar and ethanol), motor vehicles, ships, oil platforms, electronics, software, and others. With fiscal incentives by the government, many industrial companies were started in the 1970s and 1980s. Recife has a tradition of being the most important commercial hub of the North/Northeastern region of Brazil, with more than 52,500 business enterprises in Recife plus 32,500 in the Metro Area, totaling more than 85,000.A combination of a large supply of labor and significant private investments turned Recife into Brazil's second largest medical hub (the first being São Paulo); modern hospitals with state-of-the-art equipment receive patients from several neighbouring States.Recife stands out as a major tourist attraction of the Northeast, both for its beaches and for its historic sites, dating back to both the Portuguese and the Dutch colonization of the region. The beach of Porto de Galinhas, 60 kilometers (37 mi) south of the city, has been repeatedly awarded the title of best beach in Brazil and has drawn many tourists. The Historic Centre of Olinda, 7 kilometers (4.3 mi) north of the city, was declared a UNESCO World Heritage site in 1982, and both cities' Brazilian Carnival are among the world's most famous.
The city is an education hub, and home to the Federal University of Pernambuco, the largest university in Pernambuco. Several Brazilian historical figures, such as the poet and abolitionist Castro Alves, moved to Recife for their studies. Recife and Natal are the only Brazilian cities with direct flights to the islands of Fernando de Noronha, a World Heritage Site.The city was one of the host cities of the 2014 FIFA World Cup. Additionally, Recife hosted the 2013 FIFA Confederations Cup and the 1950 FIFA World Cup. The city, despite having a higher crime rate than the southern region of Brazil, is considered the safest state capital in northeastern region. It has a much lower crime rate than other regional capitals, such as Salvador or São Luís. Despite that, crime rose 440% in 2015. 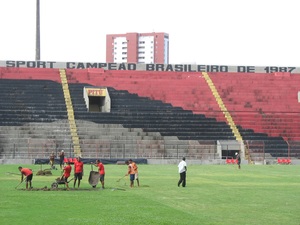