Qazvin Province (Persian: استان قزوین‎, Ostān-e Qazvīn) is one of the 31 provinces of Iran. It is in the north-west of the country, and its center is the city of Qazvin. The province was created in 1993 out of part of Tehran Province. The counties of Qazvin Province are Qazvin County, Takestan County, Abyek County, Buin Zahra County, Mobarakeh County, Alborz County & Avaj County. The largest cities are Qazvin, Takestan, Abyek, Alvand, Iran, Bidestan, Mobarakeh, Mohammadiyeh & Eqbaliyeh.
The province was put as part of Region 1 upon the division of the provinces into 5 regions solely for coordination and development purposes on June 22, 2014.The province had a population of 1.2 million people by the 2011 census, of which 68.05% lived in cities and 31.95% in villages. The ratio of men to women is 50.7 to 49.3%. 99.61% of the province population were Muslims and 0.39% of the rest came from other religions. The literacy rate is over 82%, ranking 7th in Iran. 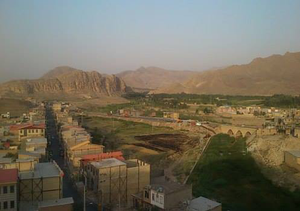