Puerto Williams (Spanish: [ˈpweɾto ˈwiljams]; Spanish for "Port Williams") is the city, port and naval base on Navarino Island in Chile. It faces the Beagle Channel. It is capital of the Chilean Antarctic Province, one of four provinces in the Magellan and Chilean Antarctica Region, and administers the communes of Chilean Antarctic Territory and Cabo de Hornos. It has a population of 2,874, including both naval personnel and civilians. Puerto Williams claims the title of world's southernmost city.
The settlement was founded in 1953, and was first named Puerto Luisa. The town was later named after John Williams Wilson, a British man who founded Fuerte Bulnes, the first settlement in the Strait of Magellan since 1587. It has served primarily as a naval base for Chile. The Chilean Navy runs the Guardiamarina Zañartu Airport and hospital, as well as nearby meteorological stations. Since the late 20th century, the number of navy personnel has decreased in Puerto Williams and the civilian population has increased. In that period, tourism and support of scientific research have contributed to an increase in economic activity.
The port attracts tourists going to Cape Horn or Antarctica; its tourism industry developed around the concept of "the world's southernmost city". Based on some definitions of what a city is, Puerto Williams could in fact be the southernmost city in the world. However, others dispute this because of the town's small size and population in favour of Ushuaia or Punta Arenas. Chilean and Argentinian media, a bilateral agreement between Chile and Argentina, and the Puerto Williams administration identify it as the southernmost city in the world.Puerto Williams is the port of entry and major hub for scientific activity linked to Antarctica and the islands south of Isla Grande de Tierra del Fuego. The University of Magallanes has a university centre in Puerto Williams. Weather stations and lighthouses at Cape Horn and Diego Ramírez Islands are supplied from Puerto Williams. The town has been a base for Chile to assert sovereignty around Cape Horn and support its Antarctic bases.
Puerto Williams also serves as a provision and service centre for fishermen. The Navy is based here in part to enforce national fishing rights in the exclusive economic zone around the southern part of Tierra del Fuego, where lucrative lithodes santolla fishing is an important industry. 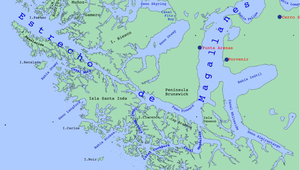