Osnabrück (German pronunciation: [ɔsnaˈbʁʏk] (listen); Westphalian: Ossenbrügge; archaic Osnaburg) is a city in the federal state of Lower Saxony in north-west Germany. It is situated in a valley penned between the Wiehen Hills and the northern tip of the Teutoburg Forest. With a population of 168,145 Osnabrück is one of the four largest cities in Lower Saxony. The city is the centrepoint of the Osnabrück Land region as well as the District of Osnabrück.The founding of Osnabrück was linked to its positioning on important European trading routes. Charles the Great founded the Diocese of Osnabrück in 780. The city was also a member of the Hanseatic League. At the end of the Thirty Years' War (1618–1648), the Peace of Westphalia was negotiated in Osnabrück and the nearby city of Münster. In recognition of its role as the site of negotiations, Osnabrück later adopted the title Friedensstadt ("city of peace"). The city is also known as the birthplace of anti-war novelist Erich-Maria Remarque and painter Felix Nussbaum.
More recently Osnabrück has become well known for its industry. Numerous companies in the automobile, paper, steel and grocery sectors are located in the city and its surrounding area. In spite of the massive destruction inflicted on the city during World War II, the Altstadt (old town) was eventually reconstructed extensively with designs loyal to the original medieval architecture there. Osnabrück was also the home of the largest British garrison outside the United Kingdom. Osnabrück's modern, urban image is enhanced by the presence of more than 22,000 students studying at the University and the University of Applied Sciences. Although part of the state of Lower Saxony, historically, culturally and linguistically Osnabrück is considered part of the region of Westphalia. 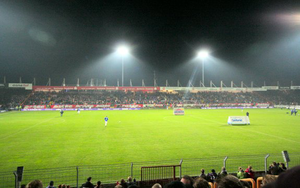