Opel Arena ([ˈoːpl̩ ʔaˌʁeːna]; stylised as OPEL ARENA; also known as the 1. FSV Mainz 05 Arena due to UEFA sponsorship regulations) is a multi-purpose stadium in Mainz, Rhineland-Palatinate, Germany that was opened in July 2011. It is used for football matches, and hosts the home matches of the German Bundesliga side Mainz 05.
The stadium has a capacity of 34,034 people, of which 19,700 seated, and replaces the Bruchweg stadium, Stadion am Bruchweg. The stadium was originally named Coface Arena ([ˈkoːfas ʔaˌʁeːna]) after a sponsorship deal with COFACE. In July 2016, the stadium arrived at its current name, per a naming rights agreement with Opel. 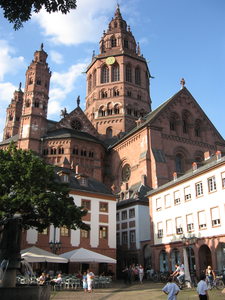