Odense (Danish: [ˈoˀðn̩sə] (listen)) is the third-largest city in Denmark.
It has a population of 180,302 (1 January 2020), and is the main city of the island of Funen. By road, Odense is located 45 kilometres (28 mi) north of Svendborg, 144 kilometres (89 mi) to the south of Aarhus and 167 kilometres (104 mi) to the southwest of Copenhagen. The city is the seat of Odense Municipality and was the seat of Odense County until 1970, and Funen County from 1970 until 1 January 2007, when Funen County became part of the Region of Southern Denmark. Odense has close associations with Hans Christian Andersen who is remembered above all for his fairy tales. He was born in the city in 1805 and spent his childhood years there.
There has been human settlement in the Odense area for over 4,000 years, although the name was not mentioned in writing until 988, and by 1070, it had already grown into a thriving city. Canute IV of Denmark, generally considered to be the last Viking king, was murdered by unruly peasants in Odense's St Alban's Priory on 10 July 1086. Although the city was burned in 1249 following a royal rivalry, it quickly recovered and flourished as a centre of commerce in the Middle Ages. After a period of decline, large-scale plans for development were made during the 18th century, which led to the rebuilding of Odense Palace and the building of a canal to the Port of Odense, facilitating trade. In 1865, one of the largest railway terminals in Denmark was built, further increasing the population and commerce, and by 1900, Odense had reached a population of 35,000. Odense's Odinstårnet was one of the tallest towers in Europe when built in 1935 but was destroyed by the Nazis during World War II. The University of Southern Denmark was established in 1966.
In the present day, Odense remains the commercial hub of Funen, and has a notable shopping district with a diversity of stores. Several major industries are located in the city including the Albani Brewery and GASA, Denmark's major dealer in vegetables, fruits and flowers. The city is home to Odense Palace, erected by King Frederik IV who died there in 1730, the Odense Theatre, the Odense Symphony Orchestra, and the Hans Christian Andersen Museum, situated in the house that was the birthplace of Hans Christian Andersen. In sports, Odense has a number of football clubs including OB, BM, B1909, and B1913, the Odense Bulldogs professional ice hockey team, and the city also hosts the H.C. Andersen Marathon. Odense is served by Hans Christian Andersen Airport and Odense station, which lies on the line between Copenhagen and the Jutland peninsula. 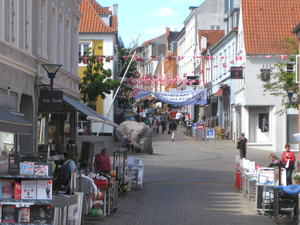 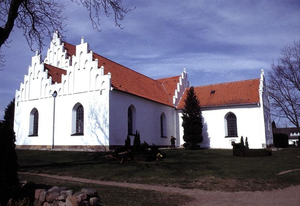 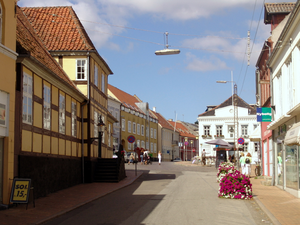 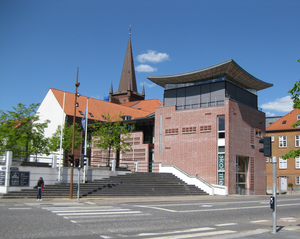 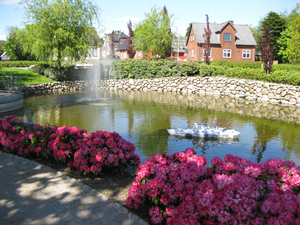