North America is a continent entirely within the Northern Hemisphere and almost all within the Western Hemisphere. It can also be described as a northern subcontinent of the Americas. It is bordered to the north by the Arctic Ocean, to the east by the Atlantic Ocean, to the southeast by South America and the Caribbean Sea, and to the west and south by the Pacific Ocean.
North America covers an area of about 24,709,000 square kilometers (9,540,000 square miles), about 16.5% of the Earth's land area and about 4.8% of its total surface. North America is the third-largest continent by area, following Asia and Africa, and the fourth by population after Asia, Africa, and Europe. In 2013, its population was estimated at nearly 579 million people in 23 independent states, or about 7.5% of the world's population, if nearby islands (most notably around the Caribbean) are included.
North America was reached by its first human populations during the last glacial period, via crossing the Bering land bridge approximately 40,000 to 17,000 years ago. The so-called Paleo-Indian period is taken to have lasted until about 10,000 years ago (the beginning of the Archaic or Meso-Indian period). The classic stage spans roughly the 6th to 13th centuries. The pre-Columbian era ended in 1492, with the beginning of the transatlantic migrations of European settlers during the Age of Discovery and the early modern period. Present-day cultural and ethnic patterns reflect interactions between European colonists, indigenous peoples, African slaves, immigrants, and the descendants of these groups.
Owing to Europe's colonization of the Americas, most North Americans speak European languages such as English, Spanish or French, and their states' cultures commonly reflect Western traditions. 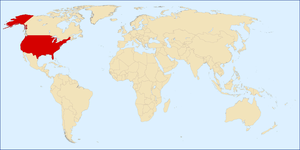 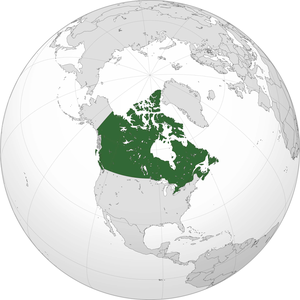