Nissan Stadium is a multi-purpose stadium in Nashville, Tennessee, United States. Owned by the Metropolitan Government of Nashville and Davidson County, it is primarily used for football and is the home field of the Tennessee Titans of the National Football League (NFL) and the Tennessee State Tigers of Tennessee State University. The stadium is the site of the Franklin American Mortgage Music City Bowl, a postseason college football bowl game played each December, and from 2020 until 2022 the home field of Nashville SC of Major League Soccer (MLS). Nissan Stadium is used for concerts such as those affiliated with the CMA Music Festival each June. Facilities are included to enable the stadium to host public events, meetings, and parties.Nissan Stadium is located on the east bank of the Cumberland River, across the river from downtown Nashville and has a seating capacity of 69,143. Its first regular-season game was a 36-35 win over the Cincinnati Bengals on September 12, 1999. Nissan Stadium has been known by Adelphia Coliseum (1999–2002), the Coliseum (2002–2006), and LP Field (2006–2015).The stadium features three levels of seating. The lower bowl encompasses the field and the club and upper levels form the stadium's dual towers, rising above the lower bowl along each sideline. The stadium's luxury suites are located within the towers. Three levels of suites are located in the stadium's eastern tower, one between the lower and club levels, and two between the club and upper levels. The western tower has two levels of suites between the club and upper levels. The press box is located between the lower and club levels in the western tower. Nissan Stadium's dual video boards are behind the lower bowl in each end zone.
The playing surface of Nissan Stadium is Tifsport Bermuda Sod, a natural grass. The climate of Nashville and the wear of hosting a game nearly every weekend often requires the field to be resodded in the area between the hashes in November.
On Nissan Stadium's eastern side is the Titans Pro Shop, a retail store that sells team merchandise. It is open year-round and maintains an exterior entrance for use on non-event dates. 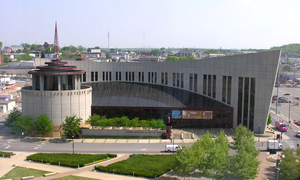