Nikumaroro, formerly known as Kemins Island or Gardner Island, is part of the Phoenix Islands, Kiribati, in the western Pacific Ocean. It is a remote, elongated, triangular coral atoll with profuse vegetation and a large central marine lagoon. Nikumaroro is about 7.5 km (4.7 mi) long by 2.5 km (1.6 mi) wide. The rim has two narrow entrances, both of which are blocked by a wide reef, which is dry at low tide. The ocean beyond the reef is very deep, and the only anchorage is at the island's west end, across the reef from the ruins of a mid-20th-century British colonial village, but this is safe only with the southeast trade winds. Landing has always been difficult and is most often done south of the anchorage. Although occupied at various times during the past, the island is uninhabited today.
Kiribati declared the Phoenix Islands Protected Area in 2006, with the park being expanded in 2008. The 425,300-km2 (164,200-mi2) marine reserve contains eight coral atolls including Nikumaroro.Nikumaroro has been the focus of considerable speculation and exploration as a location where pilot Amelia Earhart might have crashed in July 1937 during her ill-fated final flight, which attempted to circumnavigate the globe. However, to date, no evidence of her plane has been found on or in the vicinity of the island. 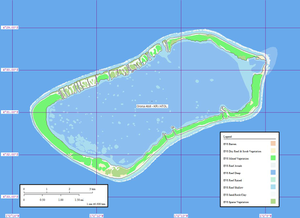