New Canaan () is a town in Fairfield County, Connecticut, United States. The population was 19,738 according to the 2010 census.About an hour's train ride from Manhattan, the town is considered part of Connecticut's Gold Coast. The town is bounded on the south by Darien, on west by Stamford, on the east by Wilton, on the southeast by Norwalk, and on the north by Lewisboro and Pound Ridge in Westchester County, New York.
New Canaan is known for its wide range of architecture and vast public parks such as Waveny Park, and a signature town center with classic boutiques. Residents carol on God's Acre every Christmas Eve, a town tradition since 1916. It is also known for its public school system, which in 2018 was ranked as the top public school system in Connecticut, and in 2008 the third-best in the country. 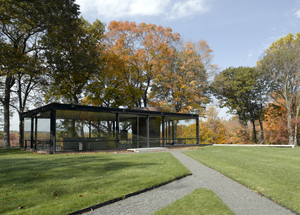