Naha (那覇市, Naha-shi, Japanese: [naꜜha], Okinawan: Nāfa or Nafa) is the capital city of the Okinawa Prefecture, the southernmost prefecture of Japan.
As of 1 June 2019, the city has an estimated population of 317,405 and a population density of 7,939 persons per km2. The total area is 39.98 km2.
Naha is a city on the East China Sea coast of the southern part of Okinawa Island, the largest of Okinawa Prefecture. The modern city was officially founded on May 20, 1921. Before that, Naha had been for centuries one of the most important and populous sites in Okinawa.
Naha is the political, economic and education center of Okinawa Prefecture. In the medieval and early modern periods, it was the commercial center of the Ryūkyū Kingdom. 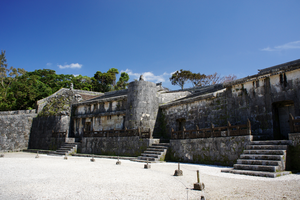