Montebello (Italian and Spanish for beautiful mountain) is a city in Los Angeles County, California, United States, located in the southwestern area of the San Gabriel Valley on 8.4 sq mi (22 km2) 8 mi (13 km) east of downtown Los Angeles. It is considered part of the Gateway Cities, and is a member of the Gateway Cities Council of Governments. In the early 20th century, Montebello was a well-known source for oil reserves. At the 2010 census, the population was 62,500. The estimated population as of July 1, 2019 was 61,954. 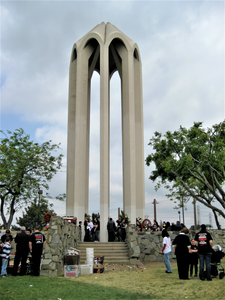