Modena Cathedral (Italian: Cattedrale Metropolitana di Santa Maria Assunta e San Geminiano but colloquially known as simply Duomo di Modena) is a Roman Catholic cathedral in Modena, Italy, dedicated to the Assumption of the Virgin Mary and Saint Geminianus. Formerly the seat of the Diocese, later Archdiocese, of Modena, it has been since 1986 the archiepiscopal seat of the Archdiocese of Modena-Nonantola. Consecrated in 1184, it is an important Romanesque building in Europe, and along with its bell tower, the Torre della Ghirlandina, is designated as a World Heritage Site. 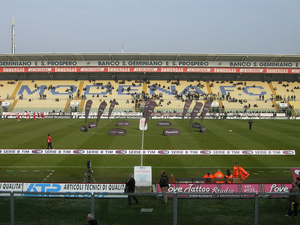