Miami Beach is a coastal resort city in Miami-Dade County, Florida, United States. It was incorporated on March 26, 1915. The municipality is located on natural and man-made barrier islands between the Atlantic Ocean and Biscayne Bay, the latter of which separates the Beach from the mainland city of Miami. The neighborhood of South Beach, comprising the southernmost 2.5 square miles (6.5 km2) of Miami Beach, along with downtown Miami and the Port of Miami, collectively form the commercial center of South Florida. Miami Beach's estimated population is 88,885 according to the most recent United States census estimates. Miami Beach is the 26th largest city in Florida based on official 2019 estimates from the US Census Bureau. It has been one of America's pre-eminent beach resorts since the early 20th century.
In 1979, Miami Beach's Art Deco Historic District was listed on the National Register of Historic Places. The Art Deco District is the largest collection of Art Deco architecture in the world and comprises hundreds of hotels, apartments and other structures erected between 1923 and 1943. Mediterranean, Streamline Moderne and Art Deco are all represented in the District. The Historic District is bounded by the Atlantic Ocean on the East, Lenox Court on the West, 6th Street on the South and Dade Boulevard along the Collins Canal to the North. The movement to preserve the Art Deco District's architectural heritage was led by former interior designer Barbara Baer Capitman, who now has a street in the District named in her honor. 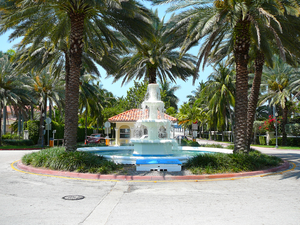