Mailuusuu (Kyrgyz: Майлуусуу) is a mining town in Jalal-Abad Region of southern Kyrgyzstan. Its area is 120 square kilometres (46 sq mi), and its resident population was 22,853 in 2009. It has been economically depressed since the fall of the Soviet Union. From 1946 to 1968 the Zapadnyi Mining and Chemical Combine in Mailuu-Suu mined and processed more than 10,000 short tons (9,100 t) of uranium ore for the Soviet nuclear program. Uranium mining and processing is no longer economical, leaving much of the local population of about 20,000 without meaningful work. The town was classified as one of the Soviet government's secret cities, officially known only as "Mailbox 200". 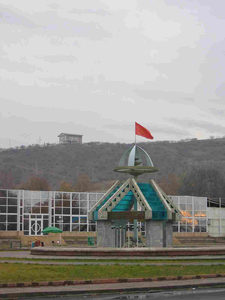