Lockhart Stadium was a stadium used mostly for soccer in Fort Lauderdale, Florida, United States. It was the home of the Fort Lauderdale Strikers of North American Soccer League. It has seen use in a variety of sports, particularly soccer and American football.
Originally designed in 1959 for high school sports, the stadium's long-standing soccer connection began in 1977 when it became the home venue for the original Fort Lauderdale Strikers of the original NASL. In 1998, it was refitted for soccer to house the Miami Fusion in Major League Soccer, but the team folded in 2002. It was also the home stadium of the Florida Atlantic Owls football team from 2002 to 2010.
The stadium site was redeveloped in 2019 and 2020 with the construction of Inter Miami CF Stadium for Major League Soccer club Inter Miami CF. 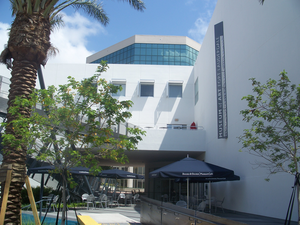