Livorno (Italian: [liˈvorno] (listen)) is a port city on the Ligurian Sea on the western coast of Tuscany, Italy. It is the capital of the Province of Livorno, having a population of 158,493 residents in December 2017. It is traditionally known in English as Leghorn (pronounced leg-ORN, LEG-horn or LEG-ərn).During the Renaissance, Livorno was designed as an "Ideal town". Developing considerably from the second half of the 16th century by the will of the Medici family, Livorno was an important free port, giving rise to an intense commercial activity, in the hands, for the most part, of foreigners, and seat of consulates and shipping companies. The status of a multiethnic and multicultural Livorno lasted until the second half of the nineteenth century, however the vestiges of that time can still be seen in the churches, villas and palaces of the city.Livorno is considered the most modern among all the Tuscan cities, and is the third most populous of Tuscany, after Florence and Prato. 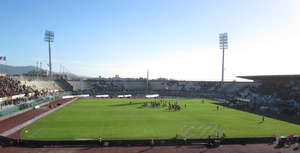