Laura is a rural town in the Mid North region of South Australia, 12 km north of Gladstone on the Horrocks Highway and 40 km east of Port Pirie. The first European to explore the district was Thomas Burr in September 1842. His promising reports soon led to occupation of the district by pastoralists, one of whom was Herbert Bristow Hughes (c. 1821 – 18 May 1892). When the present town was surveyed he named it for his wife, Laura née White (c. 1829 – 5 January 1909).Laura is administered by the Northern Areas Council, and is in the state electoral district of Stuart and the federal Division of Grey. It was formerly the council seat of the Corporate Town of Laura (1882-1932) and the District Council of Laura (1932-1988), as well as the District Council of Booyoolie (1876-1932), which covered the area surrounding the township.
The Laura Community Development and Tourism Association Incorporated liaises with the Northern Areas Council in preserving the amenity of the rural centre, with the support of many volunteers in community projects. The LCDTA's major project is operating the community-owned Laura Caravan Park. Profits from the caravan park operations are then used for improvements in the township.
The Spiny Daisy (Acanthocladium dockeri) was rediscovered in 1999 near Laura. The species, which was last seen in the South Australian Riverland in 1910, was found along a roadside. 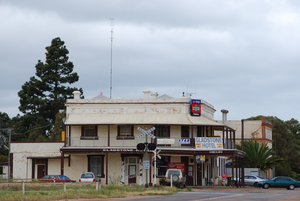