La Ceiba (Spanish pronunciation: [la ˈsejβa]) is a port city on the northern coast of Honduras in Central America. It is located on the southern edge of the Caribbean, forming part of the south eastern boundary of the Gulf of Honduras. With an estimated population of over 200,000 living in approximately 170 residential areas (called colonias or barrios), it is the third-largest city in the country and the capital of the Honduran department of Atlántida.
La Ceiba was officially founded on 23 August 1877. The city was named after a giant ceiba tree that grew near the old dock. The city has been officially proclaimed the "Eco-Tourism Capital of Honduras," as well as the "Entertainment Capital of Honduras". Every year, on the third or fourth Saturday of May, the city holds its famous carnival to commemorate Isidore the Laborer (Spanish San Isidro Labrador). During this time, the city is host to approximately 500,000 tourists. 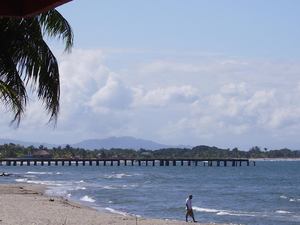