Koblenz (German: [ˈkoːblɛnts] (listen); French: Coblence), spelled Coblenz before 1926, is a German city on the banks of the Rhine and of the Moselle, a multi-nation tributary.
Koblenz was established as a Roman military post by Drusus around 8 B.C. Its name originates from the Latin (ad) cōnfluentēs, meaning "(at the) confluence". The actual confluence is today known as the "German Corner", a symbol of the unification of Germany that features an equestrian statue of Emperor William I. The city celebrated its 2000th anniversary in 1992.
It ranks in population behind Mainz and Ludwigshafen am Rhein to be the third-largest city in Rhineland-Palatinate. Its usual-residents' population is 112,000 (as at 2015). Koblenz lies in a narrow flood plain between high hill ranges, some reaching mountainous height, and is served by an express rail and autobahn network. It is part of the populous Rhineland. 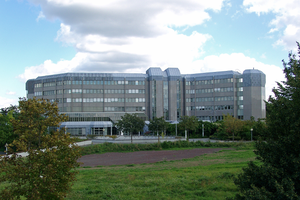