Izegem is a municipality located in the Belgian province of West Flanders. The municipality comprises the city of Izegem proper and the towns of Emelgem and Kachtem. Emelgem was added to Izegem in 1965, Kachtem in 1977. Izegem itself lies on the southern banks of the Mandel, Emelgem and Kachtem on the north. Along the shores of the canal a large industrial zone has developed, which made the three municipalities one urban area. On January 1, 2006, Izegem had a total population of 26,544. The total area is 25.48 km2 (9.84 sq mi) which gives a population density of 1,042 inhabitants per km².
Izegem is also known as the pekkerstad, borstelstad or schoenenstad. The river Mandel and the canal Roeselare–Leie run throughout the city. Izegem used to be famous for its shoe- and brush-making. Today there are only a few factories left, but the city houses a shoe- and brush museum. Until the 1920s, Izegem was often spelled Iseghem, which can be found on old passport applications, birth records, and gazetteers. The Van Iseghem surname originally referred to this city.

Izegem shares borders with the following villages and towns: 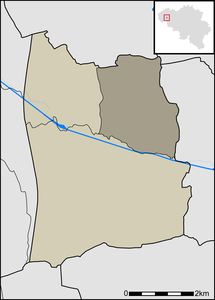