Al-Iskandariya or Alexandria (Arabic: الإسكندرية‎, also given as Iskandariyah, Iskanderiyah, Iskanderiya, Iskanderiyeh or Sikandariyeh or Al Askandariyah) is an ancient city in central Iraq, one of a number of towns in the Near East founded by and named after Alexander the Great (Al-Iskandar in Arabic). It is a majority Shia Arab district including Musayyib and Jurf Al Sakhr. The district capital is located about 70 kilometres (45 mi) south of Baghdad, near the Euphrates River. [Source: Liberation of Jurf Al Sakhar ] 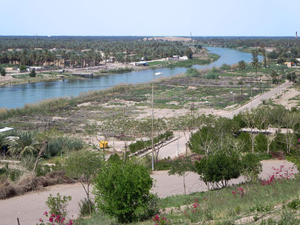