Isaccea (Romanian pronunciation: [iˈsak.t͡ʃe̯a]; Turkish: İshakçı) is a small town in Tulcea County, in Northern Dobruja, Romania, on the right bank of the Danube, 35 km north-west of Tulcea. According to the 2011 census, it has a population of 4,955.
The town has been inhabited for thousands of years, as it is one of the few places in all the Lower Danube that can be easily forded and thus an easy link between the Balkans and the steppes of Southern Ukraine and Russia, north of the Black Sea. The Danube was for a long time the border between the Romans, later Byzantines and the "barbarian" migrating tribes in the north, making Isaccea a border town, conquered and held by dozens of different peoples. 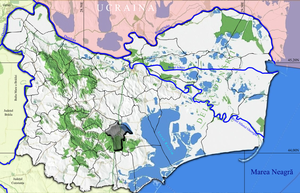