The Kobe City Misaki Park Stadium (神戸市御崎公園球技場), also known as The Noevir Stadium Kobe (ノエビアスタジアム神戸), is a football stadium in Misaki Park, Hyogo-ku, Kobe, Japan. The stadium has a capacity of 30,132. This stadium, which features a retractable roof, is the home ground of J1 League club Vissel Kobe and the rugby union Top League team Kobelco Steelers.
In 1970, Kobe Central Football Stadium (神戸市立中央競技場) was opened at the site of the Kobe Keirin Track. It was the first football stadium in Japan to be able to host games at night following the installation of night lighting. 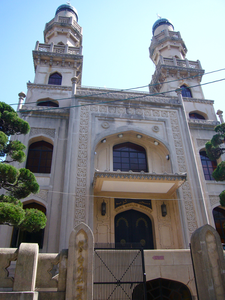