Hokki-ji or Hōki-ji (法起寺, the ‘temple of the Arising Dharma’) – formerly known as Okamoto-dera (岡本寺) and Ikejiri-dera (池後寺) – is a Buddhist temple in Okamoto, Ikaruga, Nara Prefecture, Japan. The temple's honorary sangō prefix is "Kōhonzan" (岡本山), although it is rarely used.
The temple was constructed to honor Avalokitesvara, and an 11-faced statue of the goddess is the primary object of worship in the temple. Hokki-ji is often considered to be one of the seven great temples founded by Prince Shōtoku, but in fact the temple was not completed until some decades after his death. In 1993, it was registered together with Hōryū-ji as an UNESCO World Heritage Site under the name Buddhist Monuments in the Hōryū-ji Area. 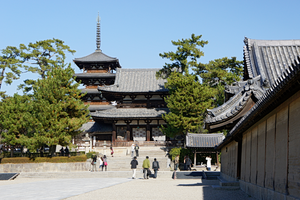 Buddhist Monuments in the Hōryū-ji Area 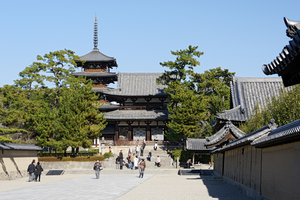