Hildesheim [ˈhɪldəsˌhaɪ̯m] (listen) is a city in Lower Saxony, Germany with 104,230 inhabitants. It is in the district of Hildesheim, about 30 km (19 mi) southeast of Hanover on the banks of the Innerste River, a small tributary of the Leine River.
The Holy Roman Emperor Louis the Pious founded the Bishopric of Hildesheim in 815 and created the first settlement with a chapel on the so called Domhügel.
Hildesheim is situated on autobahn route 7, and hence is at the connection point of the North (Hamburg and beyond) with the South of Europe.
With the Hildesheim Cathedral and the St. Michael's Church, Hildesheim became a UNESCO World Heritage site in 1985.
In 2015 the city and the diocese celebrated their 1200th anniversary. 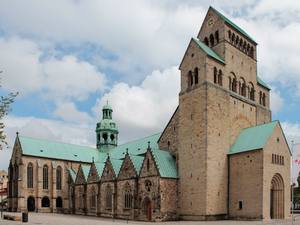 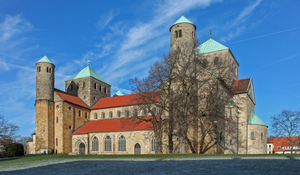