Hatsukaichi (廿日市市, Hatsukaichi-shi) is a city of some 120,000 people located in Hiroshima Prefecture, Japan. The name derives from a market traditionally held on the 20th of each month with hatsuka (廿日) meaning "20th day" and ichi (市) translating to "market". The market continues to this day on a small scale featuring fresh, locally grown vegetables and foodstuffs.
Following the absorption of the nearby towns of Ōno and Miyajima on November 3, 2005 (as of September 1, 2016), Hatsukaichi has a population density of 239.36 persons per km². The total land area stands at 489.36 km². 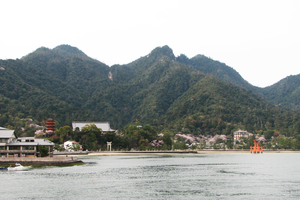