Harrison is a town in the western part of Hudson County, New Jersey, United States. It is a suburb of the nearby city of Newark, New Jersey.
As of the 2010 United States Census, Harrison's population was 13,620, reflecting a decline of 804 (−5.6%) from the 14,424 counted in the 2000 Census, which had in turn increased by 999 (+7.4%) from the 13,425 counted in the 1990 Census. Once considered "the beehive of industry", the town is undergoing a residential renewal, particularly along the Passaic River. 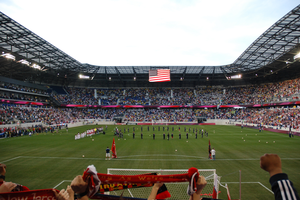