Hadsund (Danish: [hæðˈsɔnˀ] (listen)) is a city in the eastern part of Jutland with a population of 4,971 (1 January 2020) (5,428 incl. Hadsund South). The city is located by the narrow strait of Hadsund, , along an inlet called Mariagerfjord. This is a part of Mariagerfjord Municipality in the North Denmark Region. Until 2007, Hadsund was the administrative seat of Hadsund Municipality.
The town of Hadsund is home to a number of companies, including DAVA Foods and Nilfisk. The western part of the greater Hadsund area is home to the oldest still existing windmill in northern Jutland, Havnø Mølle, which was built in 1842 and operated until approximately 1927.
Although the etymology and origins of the city name remain inconclusive, one interpretation holds that the city's name can be traced back to the 18th century as "Houses of the Sound", which was formerly the collective name for the first settlements along the main road. The town was granted elevated privileges as a trade hub on December 1, 1854 (which was then the city's official birthday), but never gained de-facto market town-rights.
The town houses multiple educational institutions, including Tech College Mariagerfjord, VUC Hadsund, Hadsund School and Hadsund Produktionsskole. The city has a broad selection of supermarkets and specialty shops considering the city's modest population. The town also has the only covered shopping center in Himmerland: Hadsund Butikscenter.
Storegade has constituted the city's pedestrian zone since 1990. The street was part of the main highway between Hobro and Aalborg until the road was reformed in 1970.
Hadsund is also the birthplace of author Hans Kirk (1898–1962). 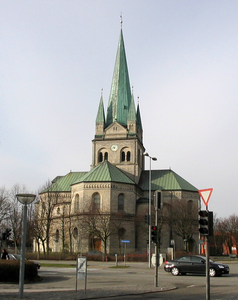