Ferrol is a city in the Province of A Coruña in Galicia, on the Atlantic coast in north-western Spain, in the vicinity of Strabo's Cape Nerium (modern day Cape Prior),) (Galician pronunciation: [feˈrɔl]). According to the 2016 census, the city has a population of 66,065, making it the seventh largest settlement in Galicia. With Eume to the south and Ortegal the north, Ferrol forms the Ferrolterra comarca, and together with A Coruña forms the second largest conurbation in Galicia, with a total population of 640,000 in 2016.
The harbour, for depth, capacity and safety, is not equalled by many in Europe. The entrance is very narrow, commanded by forts, and may even be shut by a steccado.The city has been a major naval shipbuilding centre for most of its history, being the capital of the Spanish Navy's Maritime Department of the North since the time of the early Bourbons. Before that, in the 17th century, Ferrol was the most important arsenal in Europe. Today, the city contains some of the major shipbuilding yards of the Navantia Group.
As the birthplace of the dictator Francisco Franco in 1892, the municipality was officially named after him as "El Ferrol del Caudillo" from September 1938 to December 1982. It was also the birthplace of the founder of the Spanish Socialist Workers' Party (PSOE), Pablo Iglesias, in 1850.
The city is one of the starting points of the English Way path of the Camino de Santiago. Because of the modern requirement that pilgrims must travel 100 km by foot in order to be officially recognized, Ferrol is the preferred starting point for pilgrims traversing the English Way. 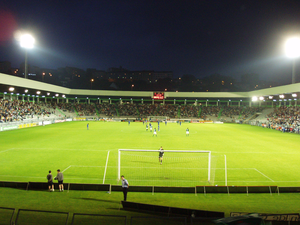