Famagusta District (Turkish: Mağusa kazası) is one of the six districts of Cyprus. Its main town is the island's most important port, Famagusta.
A district administration in "exile" exists on the Republic of Cyprus-controlled part of the island. This part of the district has a population of 46,900 inhabitants (2015).Most of the district has been under Turkish control since the 1974 invasion. Since then, the northeastern section, including the Karpaz Peninsula, has been administered separately as the İskele District, a division not recognized by the Republic of Cyprus and the UN.
Cape Greco (Italian: Capo Greco; Greek: Κάβο Γκρέκο, romanized: Kavo Greko; "Greek cape"), is a headland in the southeastern part of the district. It is at the southern end of Famagusta Bay. It is visited by tourists for its natural environment, and is a protected coastal nature park. From the high points on the cliff that rests at the cape one can view out to sea. According to local legend, it is also the home of the Ayia Napa sea monster. 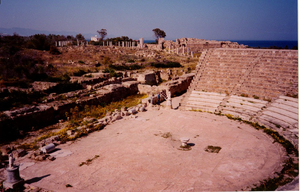