The Estádio Raimundo Sampaio, more commonly known as Independência (Portuguese: Independence), is a football stadium located in the Horto neighborhood of Belo Horizonte, Minas Gerais, Brazil. It was built in 1950 for the FIFA World Cup, held in Brazil. Initially its capacity was 30,000 people, but after the reconstruction between 2010 and 2012, the capacity is approximately 23,000 people. It belonged to the defunct Sete de Setembro Futebol Clube, which is why the stadium is called Independence (the name of the team, September 7, is Brazil's Independence Day). The stadium is currently property of América Futebol Clube, but has been leased to the Minas Gerais state government for 20 years, as a counterpart to the injection of public resources to demolish the old stadium and build the new one.
Estádio Independência is the second most important stadium in Belo Horizonte, behind only Mineirão. Its formal name honors Raimundo Sampaio, a former chairman of Sete de Setembro. América and Atlético Mineiro play their home games in there. 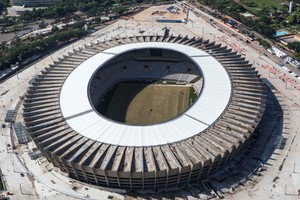