Eldorado is a city in the center-northeast of the province of Misiones, Argentina. It has 54,189 inhabitants as per the 2001 census [INDEC], making it the third most populated city in the province, and is the head town of the Eldorado Department. It is located on the left-hand (eastern) banks of the Upper Paraná River, on National Route 12, about 100 km from the Iguazú Falls and 206 km from the provincial capital Posadas, on the Argentina-Paraguay border.
Eldorado was founded on 29 September 1919 as a rural settlement and a port on the Paraná by German-born Adolfo Julius Schwelm, naturalised British subject, who named it as a reference to the legend of El Dorado. The town was the center of the European immigrant colonization of the area (which included groups of people from Germany, Switzerland, Poland, Denmark, England, and others).
The region's economy is based on agriculture, producing tung, oranges, grapefruit and yerba mate. Tourism also plays a part, with main activities being sailing, sports fishing (golden dorado), and sports hunting (tapir, deer, wild boars). Eldorado has an airport. 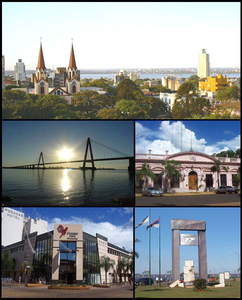