Denham is the administrative town for the Shire of Shark Bay, Western Australia. At the 2016 census, Denham had a population of 754. Located on the western coast of the Peron Peninsula 831 kilometres (516 mi) north of Perth, Denham is the westernmost publicly accessible town in Australia, and is named in honour of Captain Henry Mangles Denham of the Royal Navy, who charted Shark Bay in 1858. Today, Denham survives as the gateway for the tourists who come to see the dolphins at Monkey Mia, which is located 23 kilometres (14 mi) northeast of the town. The town also has an attractive beach and a jetty popular with those interested in fishing and boating.
The Denham region was the second area of the Australian mainland discovered by European sailors, after the western coast of Cape York Peninsula. 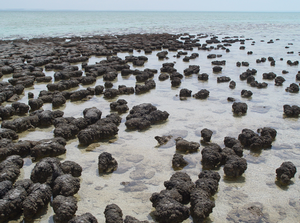